Alyse was the mother of Wesley Gibson. Although no information about her is given in the film or the comics, Wanted: Weapons of Fate provided some facts about her life.

"Alyse would still be alive if you hadn't infected her with your seed!"
— The Immortal

Although not stated directly, it is implied in the airplane mission that Alyse might have had a relationship with both Cross and his rival The Immortal.

Some time in the year 2005, Alyse was cradling the infant Wesley when members of the Paris Fraternity attacked Avenue de Brigtagne. Cross had to pursue the enemies to find his family. The two finally met on the top of a tower wall. However, The Immortal had been waiting for them, and he found the chance to shoot Alyse, killing her, while the baby is given to Cross before her last breath. 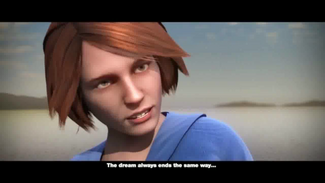 "The dream always ends the same way... it always ends with the killer."
— Wesley narrates his nightmares

But on the contrary, this information was a lie. The Immortal tells Wesley the truth, that to follow the code it was Cross himself who shot Alyse, while Wesley was the intended target of The Immortal.