The Wanted comic book series is a limited comic written by Mark Millar with the help of JG Jones in as the artwork designer and published by Top Cow Productions. It focuses on Wesley Gibson as an assassin heir to the legacy of his father. It also features several supervillan-assassins taking control of the Earth.

Wesley Gibson is a loner cubicle employee who is abused by almost everyone in his life, including his female African-American boss Janice, a local Latino gang, his adulterous ex-girlfriend, and his best friend with whom his girlfriend is having an affair. Wesley was raised by his pacifist mother after they were abandoned by his father, causing him to grow up into a wimp. All this changes when he is visited by the Fox, an assassin who shoots everyone in a grocery store before revealing herself to be a member of the Fraternity, a powerful organization of supervillains that rules the world. So long as they maintain secrecy, they are able to commit any crime without any consequences. The Fraternity wishes to recruit Wesley to replace his father, a supervillain known as the Killer, who was killed by an unknown assassin.

The Fox introduces Wesley to Professor Solomon Selzer, a brilliant mad scientist and leader of the North and South American chapter of the Fraternity. The Professor helps Wesley realize his powers by provoking him into shooting the wings off flies. The Professor explains that a long time ago, the world was overrun by both superheroes and supervillains. Tired of being repeatedly defeated and jailed, the supervillains joined together and staged a revolution that Wesley's father was a part of. After a long, bloody war, the superheroes were defeated. Using magic and advanced technology, the newly formed Fraternity was able to erase the world's memories of superheroes and supervillains. All that remained were faint, inaccurate memories, which were the cause of superhero comic books and other media. Many of the surviving heroes now believed themselves to be actors who had played superheroes.

The Professor also explains to Wesley that Fox and his father had once worked for Mr. Rictus, who controlled the Australian chapter of the Fraternity. When Rictus visits the Professor's headquarters, Fox implies that she and the Killer left Rictus' chapter because he had been harming children.

The Fraternity begins training Wesley to use his newfound powers. The training focuses on not just his physical skills but on his personality. He is desensitized to violence and eventually learns to enjoy it. He is told to commit random acts of violence before undertaking acts of revenge on anyone who even slightly wronged him. He soon becomes a full-fledged Fraternity member, accompanying them on raids of alternate universes and other missions.

Wesley is assigned to be the Professor's personal bodyguard during a Fraternity convention in which the leaders of the Fraternity's five chapters will meet. The five leaders are the Professor, Mr. Rictus, Adam-One, the Future, and the Emperor. Here, he learns that Rictus and the Future had long wanted to end the Fraternity's policy of secrecy and rule the world openly. The Professor, Adam-One, and the Emperor favored secrecy for supervillains in order to get "the loot without the leg-breaking" and always managed to outvote Rictus and the Future. Though it seems that the Emperor is about to switch sides, the Professor subtly manipulates him to vote in favor of secrecy yet again.

After the meeting, the Professor leaves in a limo hoping to pick up a child prostitute. However, his driver was actually being impersonated by Shithead, Rictus' right-hand man, and the Professor was murdered by him. Rictus and Future's factions of the Fraternity begin a revolt against the other three. With most of the Professor's supervillains killed, Wesley and Fox must fight off the rival factions on their own. They manage to kill off many of the rebel supervillains, including the Future. This culminates in an attack on their own headquarters, occupied by Rictus and his gang. Defeating Rictus and deflecting a bullet through his throat, Wesley demands to know who killed his father but Rictus refuses to answer (or is simply unable to) before he dies. A figure steps out of the shadows revealing himself to be Wesley's father, the original Killer. The Killer reveals that he and Fox left Rictus's chapter not because they objected to harming children but because they knew of his planned revolt. The Killer also says that his skills have been deteriorating with age and he does not want to be killed by anyone inferior to him. After Wesley's training, the Killer believes that he is the only one worthy of ending his life and orders Wesley to put a bullet through his head.

Another cover of the comic series 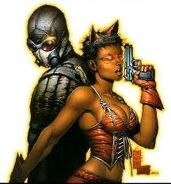 Artwork showing Wesley and Fox in the comics

A special issue of the comic series

A special cover for the 1st Issue