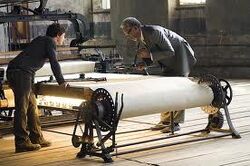 "Long time ago, a group of weavers decoded a secret message in the fabric"
— Sloan

The Loom of Fate is an ancient weaver's loom which has mystical properties.

According to Sloan, many centuries ago, a group of weavers discovered secret messages between the threads of the Loom. These were presented as Binary Codes, which when decoded, revealed the name of a person who Fate decreed should be executed. From that moment on, the weavers formed a group of assassins called "The Fraternity". Still now, the assassins select their targets as dictated by the Loom.

The Fate of the Loom[edit | edit source]

"There's not much left to this place"
— Wesley, on returning to the Textile Mill

At the finale of Wanted, Wesley avenged his father Cross by storming the Chicago Fraternity and destroying the Loom of Fate with a swarm of Explosive Rats. In Wanted: Weapons of Fate, the remains of the Loom were to be moved by three Guardians to another location for rebuilding. After Wesley killed those three Guardians before the Loom could be removed, he took no further interest in it, so its current location and status is probably unchanged.

Retrieved from "https://wanted.fandom.com/wiki/Loom_of_Fate?oldid=5500"
Community content is available under CC-BY-SA unless otherwise noted.