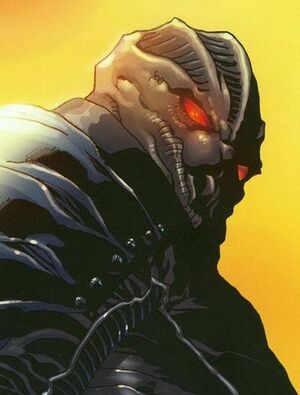 Sucker is an alien parasite that came to Earth thousands of years ago. He lives by bonding himself to a host and feeding off the life force of others to keep himself alive.

Sucker was a member of the Fraternity and was originally an ally of The Professor but switched to Mister Rictus's side because he wanted to wreak havoc on the world, and not to run the world from the shadows. When Rictus began his takeover, Sucker stood by him. He stole Fuckwit's powers and killed villains he had once teamed up with. He tried to kill Wesley but taking Fuckwit's powers also gave Sucker his lack of intelligence, and he forgot that he only had powers for 24 hours. The Killer got him to fly above the city at the same time as when he'd stolen the powers, which caused him to fall to his death.

He can take the powers and abilities of other superhumans for a limit of 24 hours.In addition,

☀he has the ability to absorb any and all forms of matter into his being by merely touching said matter. There is no limit to how much matter he can absorb and has therefore been able to consume entire realities whole without consequence. But as he consumes more and more matter, his body naturally increases in size until his victims become nothing but dust.