"You don't know who you are, or what you have."
— The Immortal's last words to Wesley

The Immortal was the main antagonist in Wanted: Weapons of Fate. 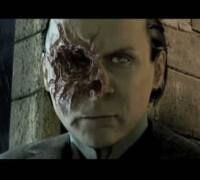 The Immortal's boss fight strategy is very similar to Araña, in that it is imperative to use Enhanced Quick Movement. This is because he is so fast that Curved Bullets have no effect on him. The major difference between the two fights is that now the player has the Fire Eaters, which can fire the Storm Shrapnel. Its use is advised.

The Immortal's combat patterns are also easy to follow as he will only move from two cover points. In the middle of the fight, minor enemies will appear from the location where he is hiding, and one enemy will get up close to Wesley and so provide a free Melee kill which replenishes the two Adrenaline that are needed for the EQM.

Repeat these patterns and he can be defeated in no time. Also make precise shots as one EQM can potentially take one quarter of his health.

The Immortal is available as a player character by beating the game on Assassin difficulty. 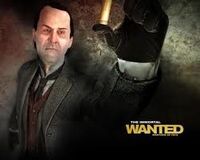 The Immortal, as seen in one of the game's promotional artworks.

An Icon of The Immortal