"Everything they told you was a lie, you are my son"
— Cross's last words

The Killer (I) is a legendary supervillain, and considered one of the greatest killers, he was originally part of

the American Fraternity of Supervillains. In the movie and its video game sequel, his real name was revealed to be Cross.

Hedonist and lover of death. He is Wesley's father, who fakes his own assassination to set the stage for Wesley to take over his role as The Killer and ultimately end his life for him.

Cross is portrayed by Thomas Kretschmann and initially appears as the main antagonist of the movie but is later shown to be Wesley's real father and a hero. He is one of the best assassins in the film. Cross is first seen shooting Mr. X with his Fantasy Rifle on top of the Metropolitan building. He then begins hunting for Wesley. He follows him

to a grocery store where he gets into a firefight and a car chase with Fox. Cross then fires upon Wesley at his apartment, shooting Wesley in the shoulder. Cross and Pekwarsky meet at a train station where they flee from Wesley and Fox. Pekwarsky gets Wesley alone on the train with Cross. They get into a firefight until the train falls off a bridge. Wesley slips but Cross catches him. But he is shot in the chest by Wesley. Cross then tells Wesley he is his real father and dies. Wesley then realizes that Cross has been chasing him only to prevent him from being influenced by the Fraternity. 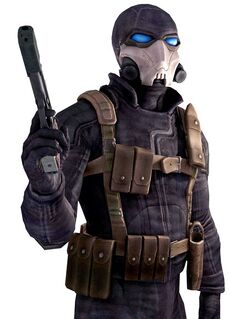 Cross is seen as playable character in flashback scenes of this game. He is first seen in the second chapter, fighting his way to reunite with his wife Alyse. Once he gets to her in the roof, Alyse is shot by the Immortal. Cross rapidly sees and shoots the shooter, takes the infant Wesley and leaves. He is then told by Sloan to take out a target aboard an airliner. After a massive shootout, he engages in a fight with The Immortal but escapes in a parachute. Cross then leaves the jet with a Dodge Viper on the garage of the plane. At the Fraternity's headquarters, he confronts Sloan and realizes that he set up the order. but suddenly the Paris Fraternity attacks. Cross makes his way to the library where Sloan reveals Cross to be a traitor to the Fraternity. During his pursuit, the Loom of Fate was accidentally burned, along with the cars, and the entrance of the headquarters Cross fights the assassins and battles the Immortal in a train, in which Cross was able to injure the Immortal's face by shooting a bullet inside his gun. From this point on, Cross is no longer seen in the later parts of the game.

Retrieved from "https://wanted.fandom.com/wiki/The_Killer_(I)?oldid=5723"
Community content is available under CC-BY-SA unless otherwise noted.